Here are the “official” 8 Moon Phases in order:

Buy a Moon Hat (a great science gift made by Star In A Star – order today and get FREE shipping), you can learn all about the Moon phases every time you wear the hat. The Moon Hat is a scientific “moon-finder” instrument that helps you locate the Moon in the sky day or night.

The Moon Hat is one in a line of “Science Clothing – clothing that makes you smarter!” It was invented and is made and sold by Daniel Cummings – the owner of this website and the author of this blog.

Play with the Moon Phases in order from right to left

This is a “physical model” of the Moon’s phase changes. Move the mouse Right to Left.

Each day the Moon moves leftward (east) through the sky – for people looking at it from the northern hemisphere. As it moves through a 29.5 day orbit, the Moon grows and then shrinks again. It starts New, grows Full, then wanes to New again.

Move your mouse from right to left on these Moon Phase emojis to recreate the correct order of phases as the Moon moves in its orbit.

The main Moon Phase cycle is very simple and symmetrical:

Studying for a Moon Phases quiz?

You can shorten the Moon phase names to: “Never can quit getting food” = NCQGF

The Moon Phases happen in a cycle that repeats.

What is Waxing and What is Waning

You can remember wax and wane because wax is growing like putting layers of wax on something. Like in the old Karate Kid movie “wax on.”

A mnemonic – DOC – will help you learn the Moon phases names

Here’s a good way to remember the order of the Moon phases if you have to choose the phase name based on an image of the phase: DOC.

The three letter word DOC is a good mnemonic for remembering the Moon phases names and how they grow first and then shrink. It’s a “shape-ronym” –  I have a feeling I just invented that name – it’s where the letter shapes help you remember something.

You can remember that “light starts on the right” of the waxing crescent, then it grows to full, then shrinks to the crescent where “the only light left is on the left.” 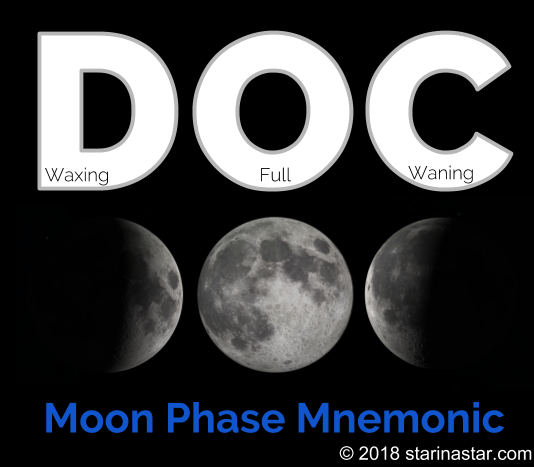 NOTE: if you are in the southern hemisphere the mnemonic is COD because the Moon is Upside Down.

As soon as the growing (waxing) Moon becomes a Waxing Crescent Moon we can see that the shape of the lit up part of the crescent can make the capital letter D. As the Moon grows through to Waxing Gibbous phase it is still shaped like a capital D.

The Full Moon is shaped like a capital O.

The waning phases make the shape like a capital C.

Here are a some interesting patterns in the Moon phases names.

What’s the deal with First Quarter and Third Quarter?

Astronomy names can be unusual sometimes. The Moon has a “First Quarter” and a “Third Quarter”… but it has no “Second Quarter” and no “Fourth Quarter” or “Zeroth Quarter.”

The Second Quarter would be the Full Moon but we don’t use that name. But, then what would the New Moon be called? Is it the Zeroth (0th) quarter or the Fourth (4th) Quarter? Is the New Moon the beginning or the end of the orbit? Based on the more common name it should be called the zeroth quarter because it is the “New” part of the orbital cycle. Zero = nothing and during the New Moon there is no Moon visible.

The Moon is at “First Quarter” but its shape is half a moon!

This is kind of strange too: the moon looks like a “half moon” two times during the moon’s cycle. It is a half moon as it grows (waxes) and becomes a half moon again when it shrinks (wanes). The moon is clearly showing half a moon.

Confusingly, astronomers actually call the “half moon” a “quarter moon.”

Anyway, why do astronomers call a half moon the quarter moon?

Astronomers use the quarters to talk about the orbit of the Moon and its location in the orbital path. The name “quarter” says “the Moon is a quarter of the way through its orbit now.”

The moon phases names are odd

How to remember the phases of the moon? Let’s face it, the Moon phases are named with really old words – the kind of words we don’t really use anymore, but we are stuck with them because the Moon is kind of important and we can’t just ignore it.

Here is a good way to think about the words tied to the phases of the Moon. These words describe 4 things: the “age” of the Moon, the apparent “shape” of the Moon, its direction of growth, and its location in its orbit around the Earth:

These words describe the “Age” of the Moon: new moon, quarter moon,

These word describe the “Shape” of the Moon: half moon, full moon, gibbous moon and crescent moon.

These words describe the “Growth” of the Moon: waxing (growing) moon and waning (shrinking) moon,

This word describes the Orbit of the Moon: quarter moon.

The Moon moves in orbit

Each day, the Moon moves along an orbit that carries it around the Earth. It takes about 29.5 days for the Moon to make a complete trip from one New Moon to the next New Moon.

Each day the Moon moves about 1/27th of the sky: 360˚/27.5 days = 13.1˚ per day. This is about the distance between your index finger and your pinky held up at to the sky at arms length. The Moon moves eastward each day toward the dawn.

The Sun is always lighting up half of the Moon.

The light of the Sun always comes from one place – the Sun! Light from the Sun hits the Moon and lights up half of the Moon at all times.

However, it is not always the same half that we are looking at from Earth. The Moon shows us only part of its bright side for most of its 29.5 day orbit. It’s only during the Full Moon that we see the entire “half” illuminated Moon.

The Moon seems to change shape

The Moon changes phase because the Moon moves. As it moves, we see different light from the Sun reflecting off the Moon every second. The amount of light we can see changes every second as it moves through space around the Earth.

A fun and easy thing to watch with a telescope is to look at the Moon and see the Sun’s light casting changing shadows on the Moon.

This article summarized the names of the phases of the Moon and pointed out some interesting patterns. You learned a mnemonic (shape-ronym) device to help remember the order of the Moon phases.